Whenever I mentioned to anyone that I was going to Las Vegas for a full week, I found they would nod their head disapprovingly. “Two or three days is enough in Vegas” they said. Well maybe if you are only intending to drink and gamble, then 2 or 3 days is plenty, but if you were hoping to see more than just the Strip I would say that a week is not even enough!

One of my favourite things to do in a new City is often to leave the city. This may see counter-intuitive, but I really like getting a little bit off the beaten track and going beyond the bright lights. Within a short driving distance from Las Vegas, you can find a different World with peaceful and unique surroundings and some of the spectacular wonders of this World.

If we were going to do a US roadtrip, we decided that we were going to do it right. That meant hiring one of the quintessential, All-American automobiles – The Ford Mustang! I mean, if you are going to be cruising down the Las Vegas Strip and into the desert, you may as well do it in a red convertible right? 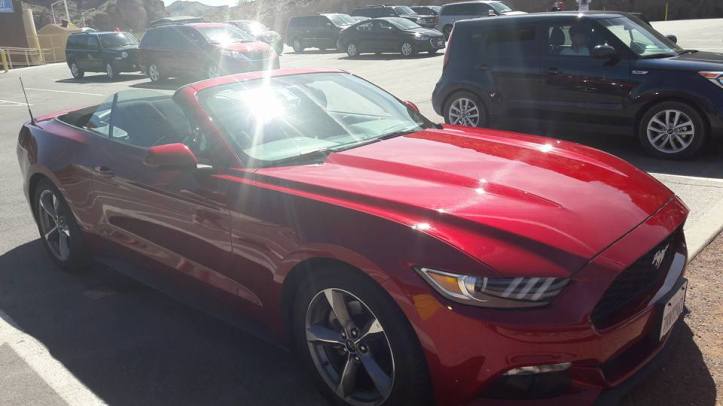 So before I get into our final destinations, just a few small tips for hiring a convertible…….. First of all, check the size of the car and how much you will be taking with you. If you have a lot of luggage, you may find that it simply won’t fit. When driving with the top down, you may feel the wind in your face making it appear cooler than it actually is, so make sure you bring plenty of suncream at a high factor! A hat is important too, but driving at speed means you need a tight fitting hat or you could run the risk of losing it to the desert! Finally, for the ladies (and long haired gentlemen) tie your hair back….. The feeling of the wind in your hair is one thing, but trying to brush it later is another. 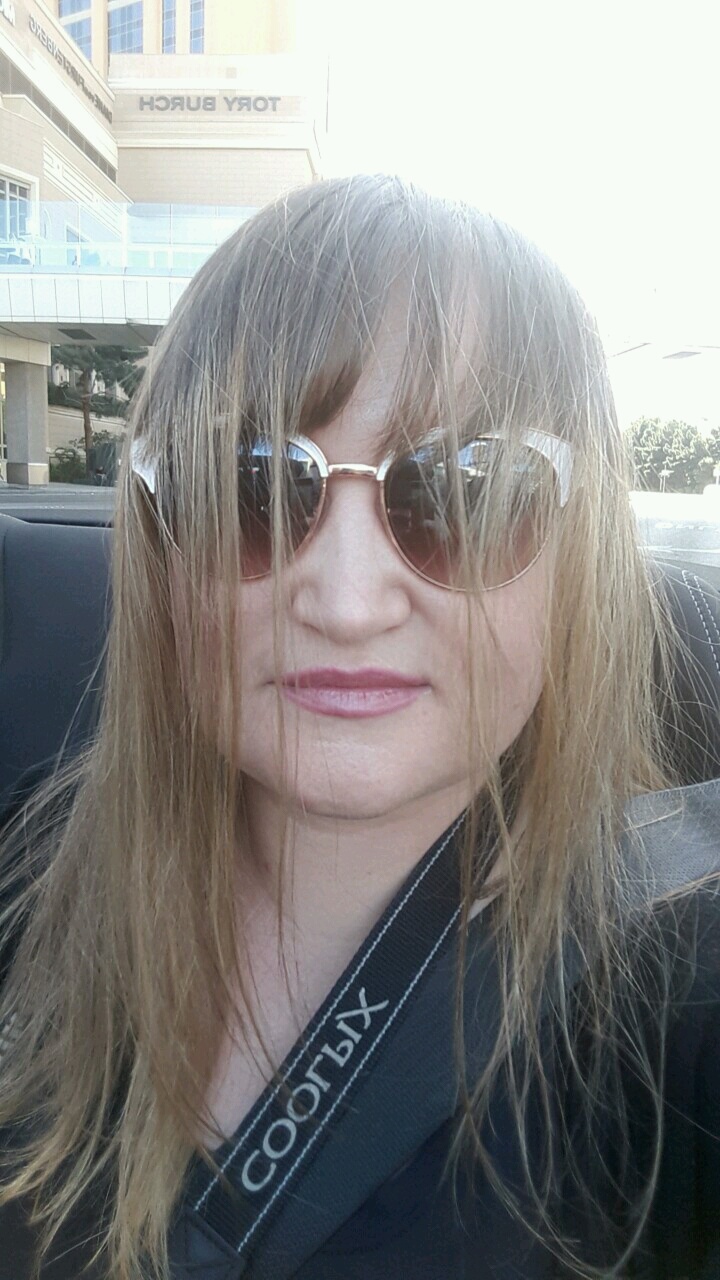 So on day one, we took to the open roads and headed for one of America’s great Industrial Wonders. We drove for about 45 minutes’ passing first, the beautiful views of lake Mead, before reaching this behemoth structure. Dating back to the 1930’s the Dam was built to provide hydroelectric power across the states of Arizona, Nevada and parts of California. As it lies on the border of Nevada and Arizona, there are two towers with clock faces and for half the year there is one hour difference between the two. We were there just 2 days after Daylight savings time, meaning that unfortunately both clocks read the same. 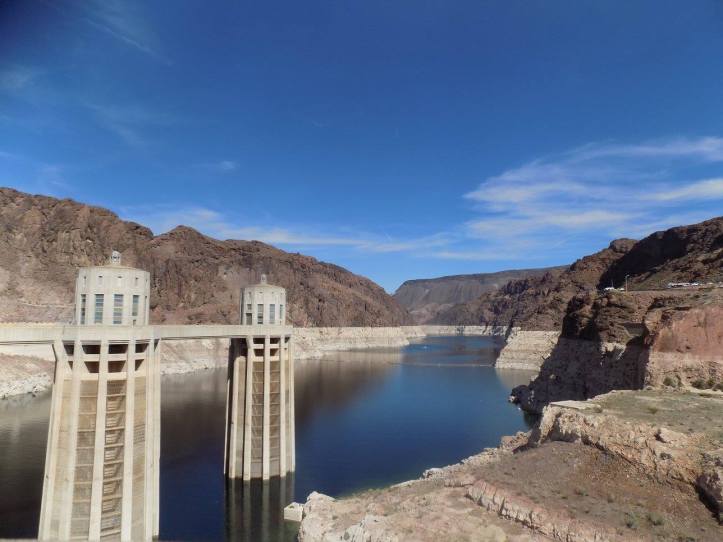 Some of the defining features include the large turrets which seem to rise up majestically from the water. You can see from the colour of the rock, the level at which the water once stood. On the far side of the dam a giant arched bridge connects the land between the two states. We drove across this mammoth bridge while heading for our next adventure. 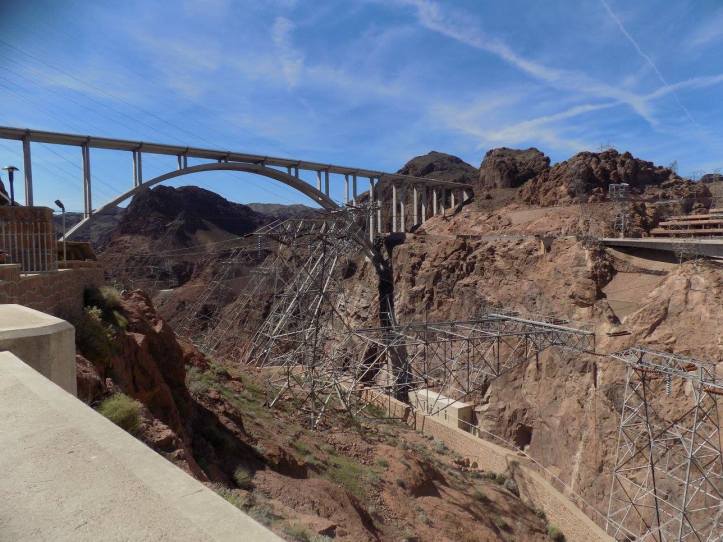 I can’t understand how anyone travels as far as Las Vegas and doesn’t make it their business to see the Grand Canyon. Helicopter tours are very popular, but they can also be quite expensive, so we decided to make use of the car and continue our road trip. A two hour drive from Vegas and just one hour further than the Hoover Dam is the Grand Canyon West. Admittedly, not the most iconic side of the Canyon, but certainly the most convenient to access from Vegas. The more popular South Rim is almost a 5 hour drive and so is a bit far for a day trip. On the way, we stopped off for some food at a small town named Dolan Springs. This was my first taste of true Arizona. We parked up outside a shop and to my surprise our neighbours were two dogs sitting in a sidecar complete with goggles. It was as if they too were on their own little road trip! The woman in the shop friendly warned us to watch out for scorpions and rattlesnakes, which didn’t fill us with confidence! 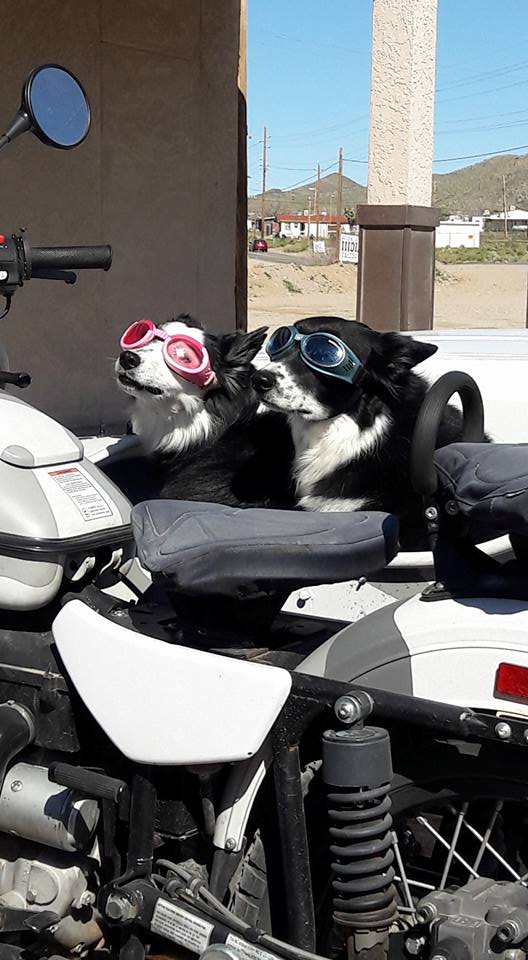 At Grand Canyon West you park up and purchase a ticket for about $50. Transport to 3 separate locations is by bus and we were first taken to a ranch were there interactive games such as a shootout and rodeo bull, as well as a Wild West style restaurant and Saloon. I got a rainbow sherbet sorbet which was absolutely delightful in the dead heat of the desert. 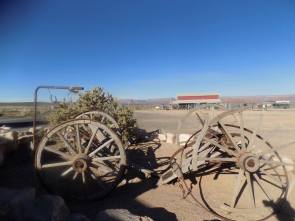 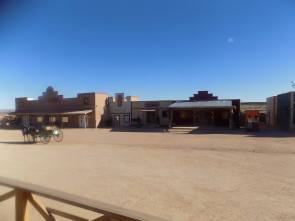 Following this we were taken to Guano Point, where we got our first view of the incredible Grand Canyon itself. We arrived not long before sunset and were one of the last groups admitted, so a dark shadow has cast over a portion of the canyon. On the other side, the evening sun meant the rusty orange shade of the rock was intensified. In the distance, helicopters, in the form of tiny red specks, gave an idea of the scale and size of the Canyon. 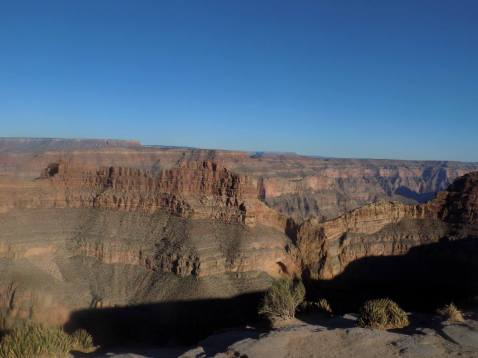 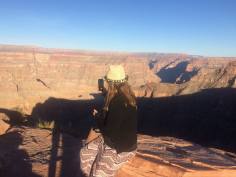 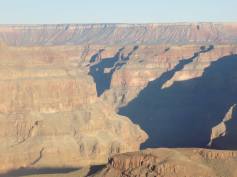 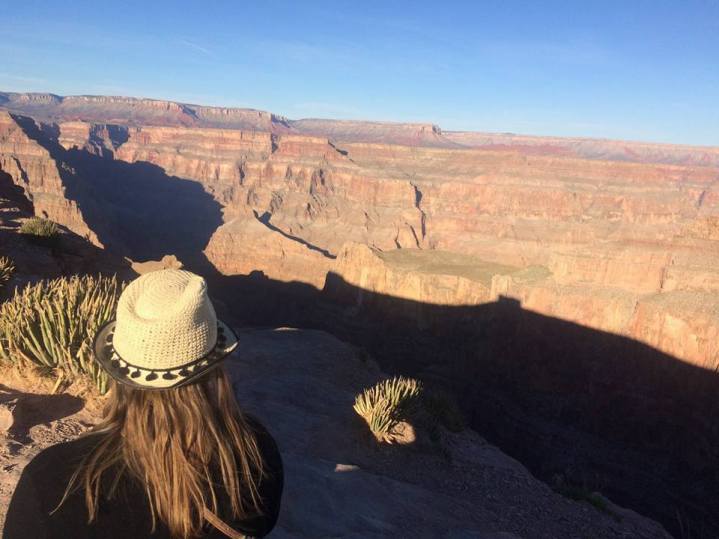 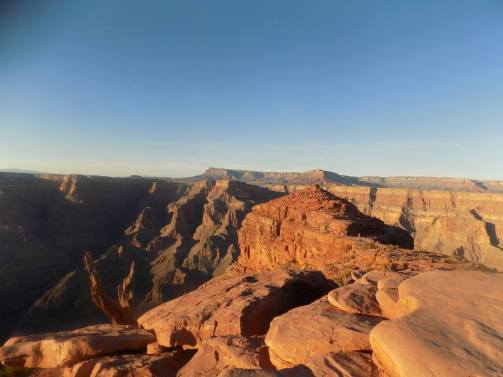 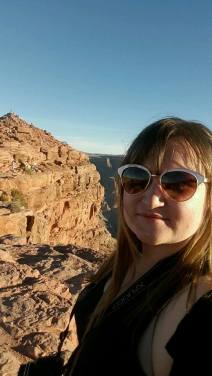 The final stop on the tour is to Eagle Point, which is another viewpoint of the Canyon. Here, there is a glass skywalk suspended 4,000ft above the bottom of the Canyon. The Skywalk itself costs an extra $25 dollars on top of the entrance fee and visitors are not allowed to bring personal belongs, phones or cameras onto the bridge. Single photographs are charged at an additional $16 each, so all things considered; we decided to pass on this experience. Even without this, I climbed to the top of one of the rocky mounds and just looked out at one of the most fascinating and mind-blowing things I have even seen in nature. 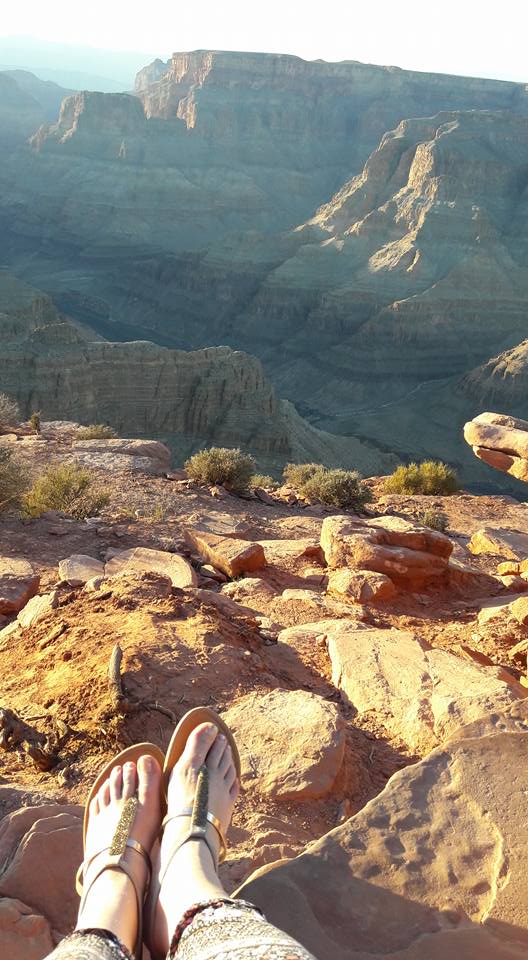 On our second day, we decided to get up early before we had to return the car. Red Rock canyon is only a 20 minute drive from the Vegas Strip, so it was ideal for a quick trip in the morning. It is hard to believe that just a short drive from the majestic fountains of the Bellagio, you reach the Mojave Desert! This national park area offers miles of hiking trails, rock-climbing, horse-riding and a 13 mile scenic drive. The scenic drive costs just $7 per carload and showcases some of the most unique red rock formations and geologic features. The drive was short but so enjoyable and there were a number of viewpoints dotted along the way. 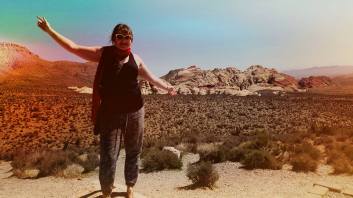 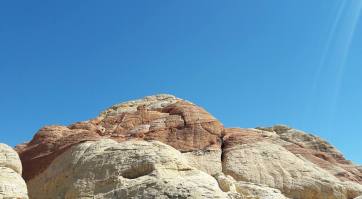 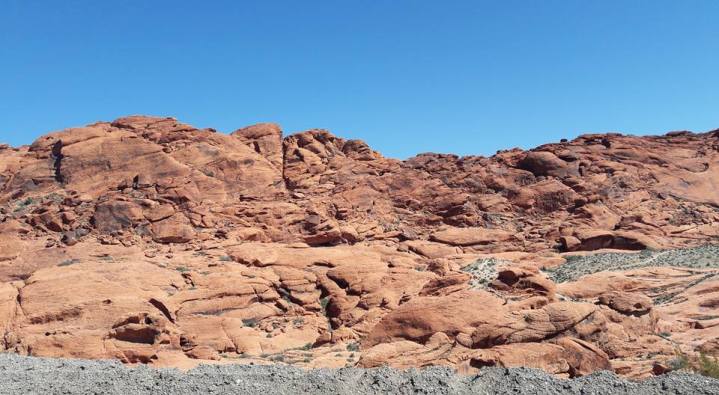 So if you are heading to Las Vegas and you have had enough of drinking and gambling, try to make at least one journey of the strip and take a look at what the wider state of Nevada has to offer. I promise, you won’t be disappointed! 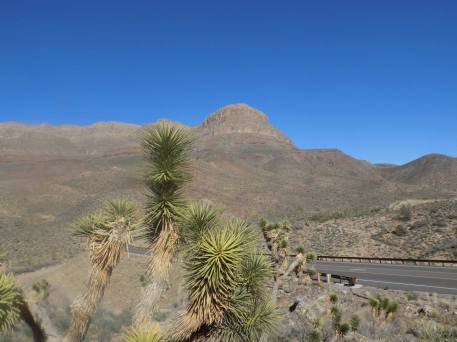 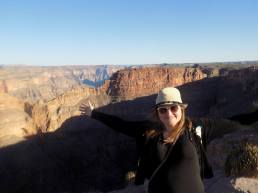 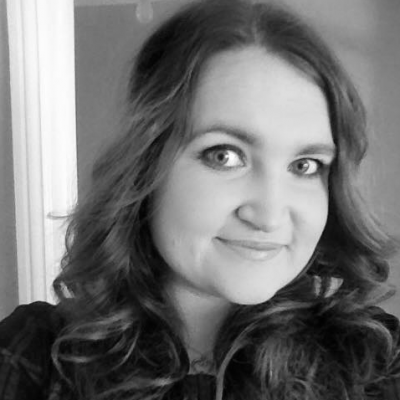